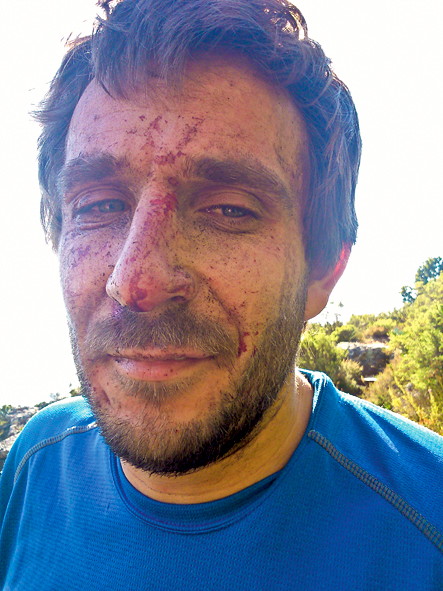 “I left my home in Tamboerskloof at 10:30am and ran up to the start of Indian Venster hiking trail which starts off Table Mountain Road and heads up under the cableway to the top of Table Mountain.

I’d been hiking for 3.5 hours when I decided to take Diagonal Path as it was closer and I hadn’t done this trail before. There is a section here called Jubilee Ridge which links the trail from the top of the mountain to Porcupine Ridge and Diagonal Path.

I came round the side of the ridge and approached a large rock where you have to step on the edge to get around. I think I put my right foot on the side of the rock so my body was facing the cliff, and tried to turn to face the side of the rock. With a small space to stand and no space to turn, my balance was compromised. I went forward off the ledge. I tried grabbing something but it was too late. I fell with no control and no way of stopping. At this point, my only thought was “That’s it, I am dying here today.” I also thought about Natasha, my British girlfriend, who was coming out to visit in five day’s time. I hadn’t seen her in four months. How could I fall days before she arrived?

I also went over the next ledge below and through a tree, onto the ground before the second tree stopped me, head first. Afterwards, it looked like a 15m drop.”

I don’t know how I didn’t break any bones or crack my head on any rocks. There were plenty around.

The first thing I did was check my head for serious wounds. There were just some scrapes on my face. I had pulled skin off my right palm and my left wrist was swollen and painful. There was a bad graze on my right knee and a hole on the inside of my right knee. I looked at it once but it made me feel faint. I made sure I didn’t look at it again, only checking below it to make sure it wasn’t pouring too much blood. My right hip and thigh were really painful. Despite my injuries, I was grateful that I could stand.

Getting back up to the trail was difficult. I had to climb up a rock face and then traverse a ridge through thick fynbos on a steep edge. Shock and adrenalin were my friends.

I saw two women I had passed earlier coming down the trail. I called to them. They came down and gave me water. Another couple arrived and gave me chocolate. They asked if they should call an ambulance. I said no, I’m not sure why. I sat for a few minutes and decided that the quicker I got down the sooner I could get to hospital. I cried, adrenalin pumping, shaking with shock and not knowing how I walked out of that. I cried a few times on the way down from sheer disbelief.

I walked to where Diagonal Path starts to drop over the boulders in the ravine. Here I phoned my brother, struggling through tears and shaking uncontrollably. I asked if he could meet me at the bottom of Pipe Track somewhere over Kloof Nek so he could take me to hospital. I slowly made my way down, which took three hours. I was 2.5km from Theresa Avenue. I took it conservatively, watching every step. The stepped terrain was precipitous, slippery and rocky, not a good place to have a second fall.

I got to the bottom of Pipe Track (1.5km from the fall). By sheer luck, Aslam Levy, a Table Mountain National Park ranger, was right there. He bandaged my knee and hand and gave me water. I phoned my brother again and asked if he could wait at the Kloof Nek offices.

Aslam called the office and asked for a bakkie to pick me up at Theresa Avenue in Camps Bay. We made our way onto Pipe Track towards Theresa Avenue. We waited for 30 minutes as the Table Mountain ranger staff were busy with three other accidents around Table Mountain.

A woman had fallen earlier and was stretchered off the mountain. Soon after that, a young boy fell from the chains on Lion’s Head, bruising and scraping himself. And a 26-year-old man fell on Lion’s Head while hiking with his family. He was in a critical condition at the time of my descent. Sadly, I heard the following morning that he did not make it.

At the hospital, the nurse administered a drip with morphine, followed by more pain relief meds. I’m not sure they did anything as I certainly felt the cleaning of the wounds on my knee and my face.

After X-rays were done, the doctor said she couldn’t believe that I had not broken nor fractured any bones. She detected air under the skin near my puncture wound. A branch had penetrated 8cm, only just missing the tendon. A surgeon had to cut open the wound and remove the air and debris.

I spent the night in hospital and slept well, despite being jolted awake from a feeling of tripping and falling just as I was falling asleep.

The experience was traumatic and I am truly thankful I am still alive. Things could have been far worse.

If you have a gnarly story of a close shave, share it with TRAIL magazine at editorial@trailmag.co.za