Stuart McConnachie has run since he can recall. Cross-country was his fave sport. “I was lucky to be exposed to a sport that accepted all the cultures of SA and can still feel and see those early events. It literally shaped what I went on to become…” 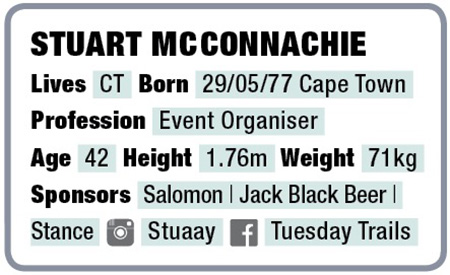 My dad and uncles were all road runners who spent time running on the mountain, as it was then termed. They all ran for VOB club. As a family, we grew up around events, from Two Oceans, to Voet of Afrika weekends in Arniston. I still recall all the winners of Oceans being my heroes. Comrades was the holy grail. Watching Fordyce from before dawn is something I will never forget.

We were outdoor kids. I am one of three boys, so we fished, climbed, hiked and generally played outdoors all day. I was blessed with skinny legs and big lungs. I could run far and relatively fast from early days.

Running competitive cross-country was something I was good at it, but it also spoke to me. Our cross-country season involved running in Newlands forest, Cecilia forest, Tokai forest, and several greenbelts. We were completely blessed as kids to be able to run and explore in the Western Cape, and also at our holiday home in the Transkei. 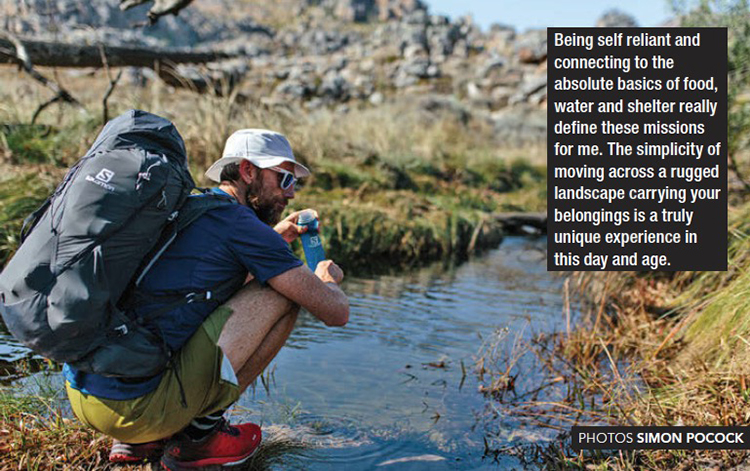 The beginning of TT

In 2014, Nic Bornman came back from Hong Kong, where there was a thriving trail community. He suggested we get the community going here. The first TT was sometime in April or May 2014.

I don’t recall who called it Tuesday Trails first, but it doesn’t matter. It’s just what it is. It was a Tuesday evening regular run and while totally uncool, it seemed logical.

It stuck and soon became simply ‘TT’. My brother Nic was one that we hauled in. Also Duane Viljoen, James and Andrew Verster Cohen and Gus my dog.

It’s funny looking back. We sometimes head up into the forest with a good crowd, and I wonder where it all went wrong (or right) if you get me. It certainly wasn’t an overnight success story.

It was hard to envision something growing like it did, but once we got started, it just became something we were doing and it resonated.

We never rallied around looking for support or runners. As we grew, so the stories started filtering out there.

When Lance Wynne (The Headmaster) joined us and brought beers for about five weeks, it cemented the post-run beer culture which is such a strong part of the social fabric, even if you don’t drink beer.I think it was mid-2016. There had sadly been a few incidents on the mountain.

People were looking for groups for safety, and we just happened to be there and filled the gap. The fact we were established and had a culture meant they could join whenever they felt like it, no obligations, no sign-ups. Just rock up and run.

It was clear from then on that people were enjoying it, and once good news spreads, it’s hard to stop it. Without Lance and the trusty fellow leaders who do it week in and week out, it would just be a bunch of mates in a carpark with a dog.

Once it had momentum, TT grew its own personality and morphed into something that’s truly Capetonian and welcoming at the same time. If those words can go together.

Ryan Sandes summed it up well: “Once you’re part of the community here – wherever you’re from – you’ll always be a part of it.” We take our mountain seriously and we are always lekker.

I was lucky enough to know the forests and trails fairly well, so leading came easy. I was feeling slightly jaded with the club and road system, so not being seen as a club was a key element.

But the passion and energy came from the community when things started to gather momentum.

TT has become the cornerstone of my week. It’s weird to think about what we did before TT. The connection to a group of people who come to enjoy a short sharp escape has become something really special. I consider myself lucky to be able to represent the community in a way.

I take my leadership role very seriously and try to be an example to new trail runners everywhere of the responsibilities we hold and the privilege we have of being able to escape onto our mountains, literally on our doorstep.

The community is now so strong, it’s easy to explain it like this: if you go to an event and don’t know someone, it’s a surprise. We travel together around the country and have the best tours and times together.

In the past, a trip to the Drakensberg would have been way too daunting for most people. Now it’s literally a plug and play.

My son Jasper has been a massive influence in my life. I’m determined to show him the outdoors in a non-competitive way. In return, he has opened my eyes to everything a kid experiences.

We learn so much from each other. With all the modern day distractions, it’s really the only place where we can go to escape. We forge memories and grow the bond between ourselves and nature, especially the mountains where one can really feel solitude. He’s developed into a solid little missioner who constantly asks for more. We both get tired, but who doesn’t.

Jasper is seven in December after UTCT. We mission a fair bit, definitely more than your average six year old.

We did our first overnight hike when he was three and a half. Fynbos can be pretty tough on a little guy. It was tough on me too, as I had to carry him for half of the hike. He’s grown into a strong little dude who can climb like a spider, sleep in caves, and generally is happiest when we are outside on the trails and mountains around the Western Cape.

UTCT (Ultra-trail Cape Town) is something we’re very proud of. The way the community rallies and supports this event is incredible. It wouldn’t be the event it is without them.

The first one was incredibly stressful. How we made it through, I’ll never know.

We did almost everything by hand, with little to no sleep. Marking the route until past midnight after three solid days, getting an hours’ sleep, and returning to the start/finish area, to see it literally blown into a corner was a moment that will stay with us forever.

We had event partners, but marking the route, the start and finish, we got it done and launched. The rest is history. Nic Bornman had a dream and I guess together we combined well as a team, complimented each other and worked really hard to deliver an international event that grows every year.

It’s really only now started to gain momentum worldwide and we think it has a really bright future.

I was in Chamonix during UTMB (Ultra-trail du Mont-Blanc) in late August to mingle, get out on the mountains as much as possible, and connect with elites.

We have Ultra-trail World Tour meetings then, so it’s almost an annual trip. I love the trails around Chamonix, and feel like it’s an opportunity to connect with the trail world, watch a big event – and have a break from the Cape winter!

Tough one, but I’d like to think I’m a genuine person who treats everyone the same. Humble and grounded, with a strong sense of what’s right and wrong. I hope I have these traits and look for them in other people.

I’m a naturally positive person, and being a dad to Jasper, I don’t want to be negative. But I’m deeply concerned by the lack of action, empathy, and understanding of how grave a situation we are facing.

The extinction of so many species, the plastic issue… it’s all pretty overwhelming. I take Jasper with me a lot on mountain missions and the thought of leaving the planet to the next generation in this state blows my mind.

Big corporations and governments are leading humanity to ruin. But in saying all those negatives, the world is still a very beautiful place. There is still hope that we can change our habits. I think we may just win the battle by sharing and exposing people to the outdoors, where they gain an appreciation for the wonder of it all.

This interview was originally published in TRAIL issue 33 where Stu was on the cover, shot by Simon Pocock.