Squirrel’s Nut Butter sponsors some of the best-known names in US trail running including Jim Walmsley, Camille Herron, Michael Wardian, Magdalena Boulet, Sage Canaday, Kaci Lickteig, Karl Meltzer, and Ian Sharman. It’s little wonder they do – trail running is a sport where sweat, long distances, dust, and water from rain or river crossings can combine to cause chafing.

We got samples from Malcolm Keyser of South African importers Embrace the Suck. The product was also featured in our TRAIL 29 issue’s Gear Guide.

Watch our short Youtube preview at Highover Wildlife Sanctuary outside Richmond in KwaZulu-Natal.

Watch our overview of @squirrelsnutbut alongside an African river on #YouTube. A review of three Squirrel’s Nut Butter products will be posted to our website in the next month. https://t.co/fDjBeGM0Z1#antichafe #balm #vegan #review pic.twitter.com/zn9XcWQuhS

Squirrel’s have used just four natural ingredients (coconut oil, cocoa butter, candelilla wax, and Vitamin E oil) in the vegan version. It applies easily, moisturises extremely well, and smells great! It has a subtle scent that faintly reminds me of toned-down dubbin. If you cycled in the Eighties or early Nineties, you’ll remember dubbin as the oily sheep’s wool extract that road cyclists would rub into the chamois leather sewn in their shorts. Thank goodness the cycling industry moved onto synthetics by the mid-Nineties.

The 2 ounce Anti-Chafe Salve tub version (pictured above) is a fraction under 60mm in external diameter. The screw top twists open to reveal a 50mm internal diameter with approximately 30mm depth of salve. External height of the tub is 51.5mm. The build quality of the polypropylene (PP, recycle code 05) container is solid, making it something you might want to reuse to stash small items. 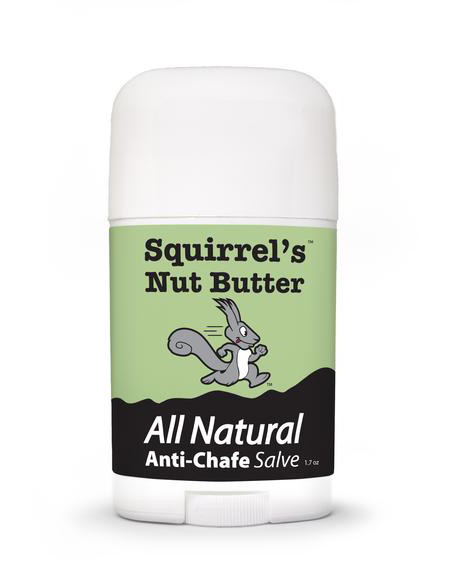 At White Mountain Festival, I did a short run in a skirt and forgot to apply the lubricant to my inner thighs. Big mistake. The resulting chafe was soothed by application of Squirrel’s Nut Butter Anti-Chafe Salve (using the 1.7oz stick version, pictured right) after the damage was done, so I could keep wearing dresses and skirts without pain.

A few weeks later, before heading up the steep Platberg mountain at the Harrismith Mountain Race, I applied Squirrel’s Nut Butter Anti-Chafe Salve to my ribs under my sports bra. I’ve had chafing there for every run over 10km in the last few months, but not this time!

It also works well as a lip balm when I have to venture out of Durban’s humidity cocoon.

I generally don’t chafe anywhere anymore (I guess over time the body adapts and we choose clothing more carefully) but I’m finding the Anti-Chafe Salve vegan version fantastic for skin protection and moisturising (face, elbows). I really enjoy the scent (and the flavour when I apply it around my mouth).

Smell and taste doesn’t sound like a big deal but it does make it more likely to be applied (which immediately increases its efficacy).

I like the fact that it contains just four healthy ingredients. Since it’s based mostly on coconut oil (which it doesn’t smell like at all), it does harden once temperatures drop below around 24 C (76 F). This makes application more of a challenge than at higher temps. The stick versions are your best better in a wider range of temperatures. You can use them from below feeezing to 35 degrees.

Back to the Salve, I use a finger nail to scrape off slivers to warm on skin where it’s being applied. In cold weather, it is better to warm the tub in a pocket close to your body so it’s softer.

Why use Squirrel’s Nut Butter?

Squirrel’s Nut Butter call their product THE ATHLETE’S SOLUTION. SNB is an athlete-tested salve proven to prevent chafing and blisters. The 2.0 oz tub of SNB makes for waterproof and mess-free application so you can put all your energy into elevating your fitness level.

Candelilla is Euphorbia antisyphilitica, a species of flowering plant in the spurge family Euphorbiaceae. It is native to the Trans-Pecos of Texas and southern New Mexico in the United States as well as Chihuahua, Coahuila, Hidalgo, and Querétaro in Mexico. It’s a vegan alternative to beeswax. It’s often used to replace other waxes to add texture or help make barrier products, such as lip balms.