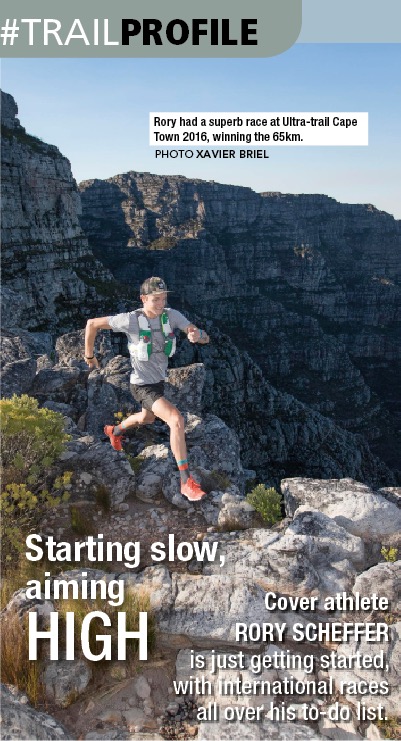 Rory Scheffer already has several wins under his belt, selectively racing as he builds to his international goals. Most recently it was the 2016 Ultra-trail Cape Town® 65km (see page 74 of TRAIL 23), after victories at Giant’s Cup Trail Run, and Dryland Traverse.

This isn’t the result of a lifetime on the track, but of a chubby teen trying to lose weight and getting hooked!

Here is his journey in his own words.

Growing up on farms, I have always enjoyed being outdoors.

Trail running is a great way for me to explore and be out in the mountains, where I feel most at home.

In 2009, half way through Grade 11, I moved to Port Elizabeth from the farm in KZN where I lived with my mother. In my last year and a half of school in PE, I put on a lot of weight.

In 2011 I took a gap year, with a move back to KZN to work on a game farm. There I realised I had to make some life changes and get healthy again.

Bring on the running 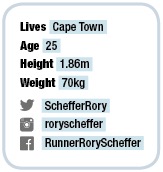 I entered my first trail event (18km Woodridge Trail Run) with a friend and absolutely loved it. We came last, but just being out there, moving, was amazing.

It was there that my love for trail running began. I started training more and slowly got fitter and faster.

The Giant’s Cup Trail Run 2014 was a big stepping stone for me in my running career. Winning the inaugural event was a great confidence boost. The event made me realise that running was something I wanted to take more seriously.

Giant’s Cup will always have a special place in my heart.

Rory went back in 2015 when the field had quadrupled in size and won again, almost an hour ahead of the next runner, Katya Soggot. 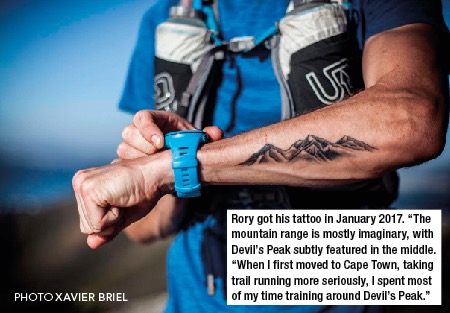 After a few successful years running in Port Elizabeth, I moved to Cape Town at the start of 2016 to pursue it at a higher level.

My girlfriend, Michelle Glover is here, so it wasn’t all about the running.

Since moving to the Cape, I have met so many amazing people with the same interests as me. I love our mountain and running with folks who share my passion for the outdoors and running.

My family have always been so supportive of my running, especially my girlfriend Michelle, who puts up with the early morning training sessions, long trips to races, and just me in general.

In 2016 I was coached by Tim Ellerbeck, who helped me get to where I am now.

In 2017 I am being coached by Nic De Beer and I’m really looking forward to working with him, and to see where he can take me.

To see which elite local and international athletes inspire Rory, read his full interview in TRAIL 23.

Where to from here?

My goal is to travel the world competing in different races.

My long term plan is to compete in the Ultra-Trail World Tour, but for now my focus is on shorter distances.

In his full interview on page 36 of TRAIL 23, Rory explains why you’ll see him listening to music at races, his account of his first international race (where he placed third) and other exciting stories not included in this extract.

Rory Scheffer lives with Michelle Glover in Cape Town with their dog, Jude. Michelle is a physiotherapist, while Rory is completing the final year of his Bachelor of Commerce degree. And boy, does she have stories to tell! 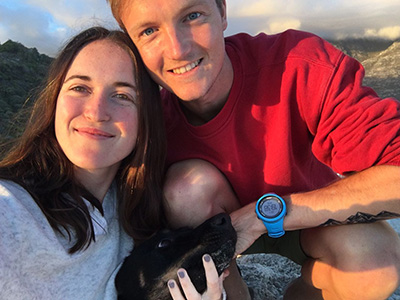 Jude is Rory’s absolute love and has become affectionately known as #TrailDogJude on social media as he joins us on our trail runs. Rory adopted him from DARG in early 2016.

He is a very talented cyclist, motorbike rider, and paddler too.

He does a lot of cross-training including swimming and yoga.

He adores his mom, Panda (who lives in PE). Rory is dealing with the loss of his dad, Roger, who passed away at the beginning of March 2017, after completing this interview.

He is a quiet guy who only speaks or gives an opinion when necessary. He doesn’t enjoy a big fuss or spectacle, and hates chaos or conflict.

Rory grew up in KZN, mostly on farms where he learned some isiZulu, and spent most of his time barefoot.

He learned to drive on the farms at age of 14 and was always surrounded by farm animals and game.

He is happiest when he is in the mountains where there is calm and peace. His dream is to live in a secluded spot on or near the mountains and train to his heart’s content.

Rory has a strong mind, can break it down on the dance floor better than most, is a great cook, and a very special friend to many.

Michelle has more to share in the full interview on page 36 of TRAIL 23. 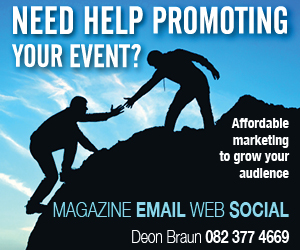