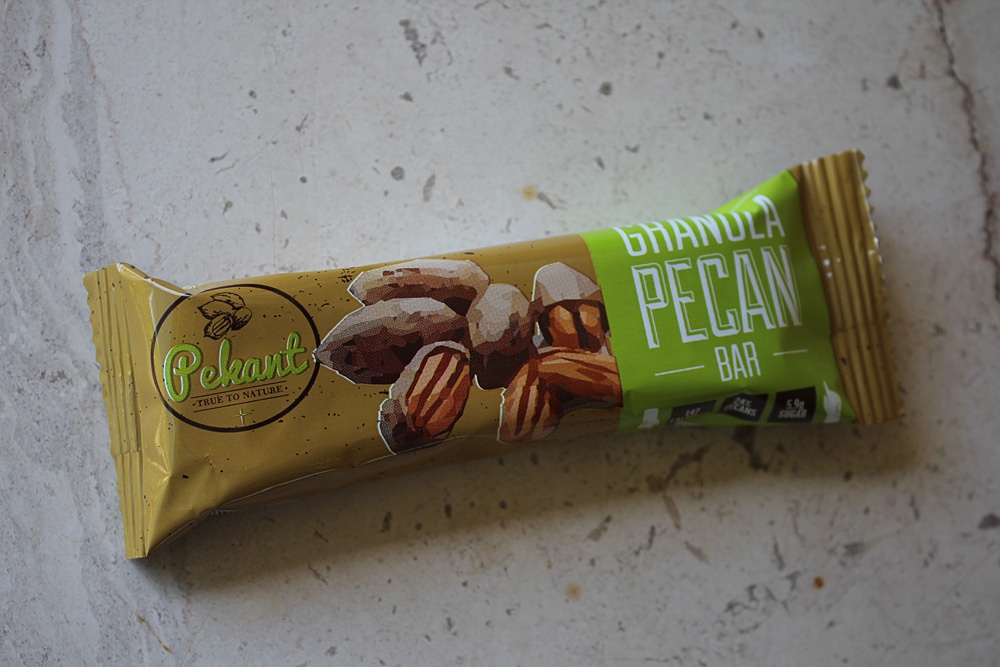 I became aware of a Limpopo-based pecan nut grower who also produces food bars with them through TRAIL magazine’s Gauteng Trail Clinic in July. This trail runner booked his seat, and asked whether he could bring some of his bars along for company. We said Sure, and so everyone at the Clinic got to try them (as well as an as-yet-unreleased pecan ball he is still developing, that is delicious).

Pekant owner Roland van Tonder is young, likeable, and enthusiastic about pecans and the tasty things made from them.

But what about the bars?

So right now you’re probably wondering, that’s all good and well, but what about the food bars his company produces in their Koedoeskop plant? Are they likeable?

We also wondered that, and had to find out, since he’s an advertiser in the magazine’s Gear Guide, and we don’t want to endorse products that are blah. Our solution? We taste-tested the 35g Pekant Granola Pecan Bar and its heavier and denser sibling, the 65g Pekant Protein Pecan Bar. Then we looked closely at each ingredient in the Granola Pecan Bar, to give you a good idea of the nutrients you could expect, as well as any possible drawbacks.

Taste tests with a small test group of a few individuals are not a reliable indicator of a food’s potential popularity with a bigger group, but they’re better than a sample of just one reviewer. The range of comments can be interesting. What one person thinks tastes delicious, another will find bland, or over-sweet, or distasteful.

Two weeks later, we took the bars to our Pondoland Trail Camp just inland of Port Edward, and sampled them to our runners and coaches there. They almost universally loved the Pekant Granola Pecan Bar, with comments like:

“The Granola Bar was stunning; it tasted like pecan nut pie. Great consistency, not too solid, and didn’t break up in a hundred pieces, making it easy to eat whilst on the go. I will certainly buy them,” said Durbanite Christine Terblanche.

My own thoughts, written in my notebook after eating two of them in as many hours were: “Moist, spongy chewiness, extremely tasty.” What I like about them is that the chewiness comes without an over-dense texture like some bars have. There’s also no tooth-clogging or roof-of-mouth stickiness like some bars.

Excessive sweetness of sport bars is an issue for some people. My sweetness rating for the Pekant Granola Pecan Bar is an 8/10, for a taste I feel is not overly-sweet. That is due probably to the proteins, fats, and savoury flavours provided by the pecans and oats.

I ate the first 35g, and it was more-ish (I’m not the only one thinking this!), so I felt like eating just a little more. “This needs to be a bigger bar, like 50g, or maybe even a 65g mega-bar like the Pecan Protein Bar,” I told myself.

But I changed my mind on eating the second bar 30 minutes later. The sweetness (and nutritional density of the separate ingredients) is accentuated when you eat the second bar without giving the first a good digestion head-start. Granted, that second bar wasn’t eaten while on the move, like you’d do during a run or race, so the multiple-bar sweetness would probably be less noticeable when training and racing.

In my experience, the 35g portion is probably the ideal size as an everyday snack. During training or a race, eating more bars will be fine, but I’d space them out with less processed foods like raw seeds and nuts, and sandwiches with peanut butter or Marmite.

The wrapper list shows the major component of the bar is granola, made up of rolled oats, brown sugar, non-hydrogenated vegetable oil (unfortunately sourced from palm oil. According to Pekant, the manufacturer that makes the bars for them only buys palm oil from producers that are part of the Roundtable on Sustainable Palm Oil), golden syrup, and salt. Pecan pieces make up 24% of the bar. Other constituents are Isomalto-oligosaccharides prebiotic fibre*, brown rice syrup, maple syrup, and cinnamon. This bar is suitable for vegans.

*An excellent critical look at ISOs is here.

The Pekant Granola Pecan Bar is a small, nutrient- and energy-dense sports bar, that is mostly made from wholefood sources, but it does contain processed ingredients like brown sugar, three kinds of syrup, and Isomalto-oligosaccharides prebiotic fibre (7g of it, sourced from cereals).

In my opinion as a non-qualified nutrition enthusiast only, this bar sits midway between wholefoods like mixed nuts and seeds (which you can put into a Zip-loc bag and take on runs), and processed foods like energy bars where you cannot see the ingredients in their original form. I would use this bar for racing, and as a pick-me-up once my real food (fruit, nuts, seeds) ran out on long training runs. I consider this a healthy occasional snack food, but always second to real wholefood.

The Pekant Granola Pecan Bar is a bar I would buy as emergency food on my long runs. The wrapper is sturdy, and has to be torn into the serrated teeth to open it, otherwise its side-to-side weld is almost too strong to break. It should stand up well to being carried in your hiking or trail running backpack for several months if you keep it purely for low-sugar moments.

Since it is mainly made with wholefood ingredients, this bar can be recommended over the majority of bars on the market that use an unrecognisable blend of ingredients. Stay with wholefoods wherever possible.