Every issue of TRAIL magazine features reader letters. We’re always amazed and inspired by your insightful and creative commentary on the trail running lifestyle.

Your opinions, life-changing experiences, happy and sad memories, and reflections on our sport are an important part of TRAIL’s identity.

Why not share your thoughts with us right now? Email us at letters@trailmag.co.za for a chance to be published. If we publish your letter, you will be enjoying running in Feetures running socks.

Getting your letter published

Be sure to include:

It’s best to keep your contribution under 300 words.

Every person who has their letter published will receive a pair of Feetures Elite Light Cushion trail running socks, worth R239!

This letter from Robin Gardner of Hilton appears in TRAIL 30.

I have done lots of wild and woolly trail runs. From my first Drakensberg clamber as a high school kid (up Sterkhorn and Gray’s Pass to overnight on Champagne Castle) in the 60s I’ve loved the fresh air experience associated with high mountains.

In the initial years of SkyRun, if you got to Balloch Cave by 3pm you were allowed to continue through the night to finish in Rhodes (Walkerbouts). The distance was about 150km, although the organiser, John-Michael Tawse, claimed it was 100 miles.

The paths were not marked and we navigated by map, memory, compass, and torchlight. The early GPS devices were only just becoming available, and were few and far between.

The organisers have progressively shortened the route since the inaugural one, cutting out Ben Macdui and Tiffendell and spectacular views from these. The illuminated ski-run which jumped out of the dark as one approached the summit of Ben Macdui was nothing short of bizarre, and the sunrise from the slopes above Rhodes rather special and exhilarating.

I took part in SkyRun each year from 1998 to 2002. From 2002 onwards for several years, the finish was shifted to Tiffendell ski resort.

The organisers felt the section from Tiffendell to Rhodes (about 21km of dirt road) did not align with trail running ethos. Later, from about 2011, the race route was shortened even further, cutting out the climb to top of Ben Macdui and descent to Tiffendell.

There’s also a story I could tell about myself and two Raubenheimer brothers trying to set up a record for the Drakensberg Grand Traverse. That’s a whole other story in itself, including being attacked by a pack of hunting dogs during a solo training run in Lesotho. But I’ll save that telling for a rainy day…

We can’t wait to hear from you! letters@trailmag.co.za 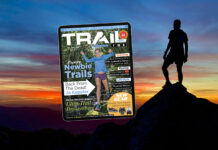 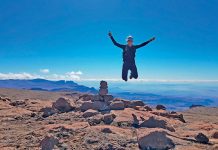 Send us your trail running pics