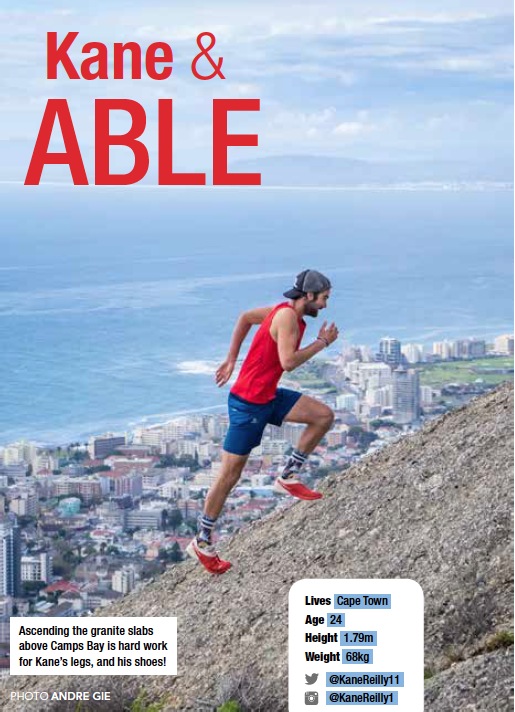 Whether he is surfing, training, winning Table Mountain Challenge, or messing around in the Cederberg, Kane Reilly is doing it because he loves it, not for the pain, money, or fame.

After almost losing his ability to run in 2014, this 24-year-old is wise enough to know that there’s more to life than a win or a sponsorship.

Who are you, really?

That’s a question I’ve asked myself a few times. Trail running and spending time in the mountains has a huge impact on who I am and how I live my life.

So when I was first diagnosed with a bizarre thing the doctor called spondyloarthropoly, I had to address the idea of if I would ever race or even run seriously again… and if not, then what?

I came to the realisation that there is a huge amount to life beyond running.

There are many small doses of instant and long-term gratifications that can be enjoyed: going out on benders with friends or surfing.

I simply love running, being in the mountains and throwing down, but I wouldn’t want it to become my whole life. I like to think that living a holistic existence is the way to go.

Who is important to you?

The Reillys are a very close family (Hey mom!). My parents and siblings are a huge part of my life.

My mom Maxine is a passionate traily and has always been very supportive of my running and pretty much anything I go for. My dad Michael has been surfing for over 40 years and his passion for it has had probably always lead me to pursue a lifestyle sport, whether it be in the water or on the mountain. He’s a major mentor to me: someone who I can philosophise with for hours on end.

[Find out what Maxine has to say about Kane in TRAIL 21.]

My sister Sam is a year older than me and one of the smartest people I know. We have always been very tight and we lived together in a flat over my months of being unable to run. She helped me see lots of light in other things on that journey.

My brother Adam may be four years younger (and slightly shorter) than me, but is someone who I look up to. He’s always had a set of values which he lives out and in his recent entrepreneurial venture: Fresch Foods (blatant brand punt). He just started an awesome cafe in Muizenberg, going for something he’s passionate about.

In the last few years the relationships that may have been most influential on my running and current state of mind are my coach former coach and mentor Jacques van Rensburg, girlfriend Emma, and Andre Gie.

Jacques taught me most of what I know about running! He has been a huge part of everything I’ve achieved this far as well as my training philosophy and appreciation for throwing down on the flat (I completely disagree with the idea that flat is boring).

[Find out what Jacques has to say about Kane in TRAIL 21.]

Andre has shown me how much fun can be had in the mountain, with absolutely no agenda to it. Just good, authentic fun.

My girlfriend Emma couldn’t care less about my running or racing as long as I’m having a good time and not obsessing over it. This serves as a constant reminder that living holistically is the way to go for me. It’s all about balance.

My main sponsor over the past few years has been Salomon. It came about when I was getting into the trail scene at the Spur Trail Series. After a few solid races my mom (aka manager/agent) hassled Big Steve from Salomon until he gave me a shot.

My first race in Salomon gear was Table Mountain Challenge in 2013. I felt like a ninja in my new gear and went out like a seasoned pro… but ended up lying face-down, sucking water out of a pond on top of the mountain.

Luckily that taught me a few lessons for future races. At Otter I got a solid result (fifth place and subfive-hour) which affirmed Salomon’s and Steven’s confidence in me.

I also run for Llama Bar, Stance socks, and Fresch Foods (my brother Adam’s business). I like to be associated with brands whose ethos I respect.

Read the full interview with Kane Reilly in TRAIL 21, including his journey to recovery, personal motivation, approach to nutrition and stories from his mother and former coach!