It has become all the rage. Some have seen the monetary opportunity in this movement, and are proposing mass plantings of the ‘wonder plant’ – with messaging like ‘Save the planet, plant spekboom!’

This is utter nonsense! Monoculture planting of anything is against the principles of nature and fails to create the safe and diverse spaces that threatened species need to ensure their survival. Each insect and plant ﬁlls a niche with its own important function.

Carbon dioxide draw-down is the main focus of spekboom planting. But it doesn’t recognise the bigger picture. It is no use drawing carbon into soil that cannot hold it. Microorganisms (speciﬁcally the mycelial networks of fungi) enable the soil to hold carbon instead of releasing it back into the air.

This carbon within the soil in turn lets soil particles hold moisture on their vast surface area. If we allow it, the micro-life will hold the carbon and the water for us.

Right now, humans are perpetuating a mass extinction with our single-track minds. The stats are sobering: 53% of butterﬂ y species, 49% of beetles, 46% of bumblebees, and 61% of amphibious species are in decline (source).

Dr Luthando Dziba, head of conservation services at SANParks, predicts that over half of Africa’s bird and mammal species could be lost by 2100.

Most of this destruction is caused by bad farming practices: bare soil, pesticides, insecticides, killing of predators, clearing indigenous vegetation, and monoculture. Yes, we are literally eating the Earth and all her beauty. However, without insect and animal pollinators, we will have no food. As they decline, so will our food security.

Like human beings, other animals as well as plants are made up of more bacterial cells than their own cells. Diversity within the microbiomes of the soil, on plant leaves and roots and within and outside of our bodies is what keeps all life on Earth functioning. Bacteria within our gut and in the soil produce compounds which can switch on and off our genes, and those of plants. At certain densities, micro-organisms reach tipping points and begin to perform different group functions than the functions they were able to perform individually. Low microorganism density and diversity reduces plants’ abilities to withstand drought and pests – making them weaker and less productive.

South Africa suffers from frequent and prolonged droughts and infertile soils because our soils lack micro-organisms to build topsoil and bind to water vapour to create rain droplets.

Scientists have found that 66%-85% of the greenhouse effect is caused by water vapour, versus just 9%-26% by CO2 (source). By covering soils with diverse plants which facilitate diverse micro-life, we can bring the vapour back into the soil as life-giving moisture. Water vapour is only brought down as rain when green plants release bacterial ‘aerosols’ which attach to small water particles and make them heavy enough to fall to the ground. Fungal spores also do this. Without these micro-organisms, the vapour sits as a haze in the atmosphere. Only diverse plants and covered ground will facilitate this important micro-life.

So here’s what we can do: seek knowledge on indigenous and local plant species, plant these wherever we have space, and cover the ground around us with plants. We can encourage food growers to do the same, support local farmers who adhere to these principles, stop the use of poisons, and allow Nature to ﬁx herself.

We challenge you to plant diverse gardens of local and food species to create safe spaces for animal and insect species and to facilitate the diversity of microlife that is required for healthy soil. Plant these gardens in your backyard, on verges, in schools, hospitals, libraries, ofﬁce parks, on street corners and in containers on your balcony or windowsill.

To tackle the multi-faceted crisis that we all face, we challenge you to plant 10 local* and indigenous plants this year. All plants are wonder plants and each serves an important function – often beyond our comprehension.

Don’t get us wrong. We love spekboom. For an example of spekboom planted in more diverse systems, Steampunk Coffee is growing spekboom in food forests, with other indigenous plants. The Great Labyrinth of Africa has also stated that they will be planting a variety of fynbos support species around and under their spekboom.

We would love to see your biodiverse gardens. Use #biodiversitychallenge in your social media posts.

*Local species are those that occur naturally in your area. For example, spekboom is indigenous to South Africa, but not local in Cape Town or Johannesburg.

This article was originally published in TRAIL 35. 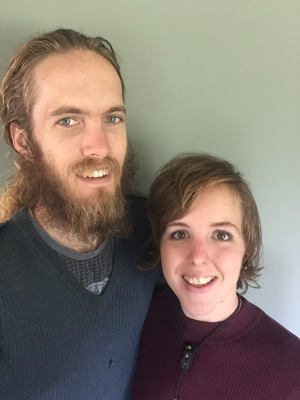 Bruce Kaiser and Kelly Steenhuisen started The Organic Pear in 2018 as a gardening information sharing platform, to inspire others to grow nutrient-dense food. It has expanded to include permaculture and regenerative agriculture, environmental awareness, medicinal plants, indigenous plants, community, and off-grid living. They completed their Permaculture Design Course (PDC) in 2019.