This must be why my favourite part of the race was the steep, slippery, technical ascent up the gorge, shaded by the sheer, rocky mountainside. I power-hiked past panting participants as they pretended to take in the view while catching their breath.

This is not a trot for roadies to transition to trail. This is a course to turn your thighs to jelly, and to swell your chest with pride as you look back at the mountain you tamed. All that in 15km and 676m of ascent!

In its 93 years Harrismith Mountain Race has picked up a legion of fans. After being invited to run South Africa’s oldest trail race on behalf of TRAIL magazine, I have become one of them! Not only is the mountain an excellent obstacle, but the people, history, and culture of the race make it irresistible. These are the stories from Platberg, told by a diverse pool of runners.

Monja Strydom’s family has a tradition of running the Harrismith Mountain Race. This year she and her (very fast) brother, Joost, carried the Strydom torch.

“My father and all my uncles ran Harrismith Mountain Race while they were in school and university, without much preparation. They are originally from Harrismith. My grandfather used to assist his doctor friend on top of the mountain way back. My grandma has a photo of the early seventies where my grandfather and Dr Mike sit on top of the mountain covered in snow waiting for the athletes.

“I am actually extremely proud of my brother, Joost. He studies in Potchefstroom. He does not have his own car and did not get a lift in time. He decided to hitchhike to Harrismith as we were determined to do the race this year. He got a lift in a road construction bakkie, a truck, and a Mercedes ML.

“Everything went well until he arrived in Petrus Steyn… No vehicles came past at all! This caused him to almost die of the cold in Petrus Steyn, and me to almost die of stress! He arrived in Harrismith just in time. I had an hour or two of sleep (waiting for him) but he almost did not sleep at all. With all the stress, cold, no sleep, and no training, he still finished in 1h43min!” 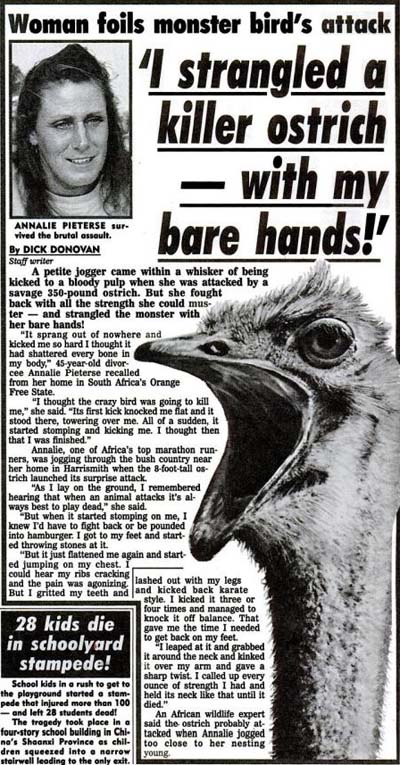 The terrain and extreme weather isn’t the only danger trail runners have to contend with on Platberg.

On a bitingly cold Sunday morning in 1992, Annalie Gildenhuys Pieterse set out for a casual training run on the foothills of Platberg in the eastern Free State. She is a celebrity in South African running circles: she was an accomplished track athlete, and the SA Cross Country team captain.

On this particular morning she spotted a large male ostrich, and kept a close eye on him, as it seemed aggressive.

The bird waved his wings in a hostile display and she realised he was picking a fight.

The 42kg trail runner fled, and the 160kg ostrich followed. He caught Annalie and kicked her from behind, knocking her flat on her stomach. She watched him from the ground as he retreated. She again tried to run away, throwing stones at he but he caught up and kicked her down once more. The bird climbed onto her back and danced, as ostriches are known to do.

Annalie turned to lie on her back and pulled her legs up, proceeding to kick him off balance.

She flew to her feet and stood breast to breast with the massive bird. In an adrenaline-fueled moment, she noticed the ostrich’s beautiful long eyelashes. She grabbed him by the neck and squeezed, twisted and turned until the ostrich lay at her feet, dead.

Annalie limped back to town. Her shirt was torn and there was blood everywhere. A thorough check-up showed that her ribs were broken and had punctured her lungs.

Annalie is now not only well-known, but legendary!

The Free State played host to the 93rd Harrismith Mountain Race. The pedigree of the oldest trail run in South Africa…

Hilton Murray ran the Comrades distance nine times in the nine days preceding Comrades, before running the race in 2014. The two-metre tall ultra-runner took on the much shorter HMR, and raised awareness for international Penguin Day with his specialised hat.

“The uninformed say the Free State is flat. Not my Free State as you can see!

“My Bellville club-mates did not think much of my 1h46min for a 15km ROAD race… Can’t blame the misinformed can we!”

His roadie mates aren’t the only ones who underestimate the Platberg.

“My klein boet Marius is six years my junior and 65kg my senior. He took 2h20min to reach the top of Platberg, had a beer with an old school mate, and went back to the start in a Pajero!”

Durbanite roadie Janie Grundling won the women’s race 6 minutes away from the record, and 8 minutes ahead of the runner-up, in 1h39min.

“Harrismith Mountain Race was my first trail race and I enjoyed it very much! I am from Durban and knew that the altitude was going to affect my time quite a bit. I didn’t know what to expect.

“I did google the race and thought that I can chase the record, because I can run a sub 60min 15km on the road. But, oh my, I realised that 1h24min for that race is very hard to break! It was tough.

“I am actually a road runner, but I do some of my training runs at Giba Gorge in Marianhill. Trail exercises different muscles and makes you much stronger for the road. Being in nature and not next to a busy road makes for a stress free training.

“The most challenging part was getting to the top of that mountain. I am still stiff five days later!”

Brett Clarke was coerced, by me, into running Harrismith Mountain Race. He was nervous before it started, but the big yellow sign his girlfriend made, and a better-than-expected time, left him with only good memories.

“This was my first Harrismith Mountain Race and I was looking forward to it immensely. I was initially a bit intimidated by the description on the website, calling Platberg ‘the toughest obstacle in the world.’

“Once I started running, and the endorphins started pumping, I had one of the best runs of my life. The climb up was insane and the view? Wow. I just wish I had thought to bring my GoPro.

“The summit felt like running on top of the world. Nothing but sky and bosveld.

“The down-run was really tough but it was the home stretch.

“Honestly, it was one my most enjoyable runs ever.

“I will definitely do it again, and look to perform even better.”

“I did my first Harrismith Mountain Race in 2004, and I skipped one year so this was my 10th.

“We try to get novices to run this race every year. Pieter Erwee was one of them at one stage and now he is also hooked!

“I’m not sure what it is about this race that makes it so special. Maybe the whole history around this event, with the challenge to get to the top within an hour (this was the first year we didn’t try to meet that challenge). It could be the difficulty of the race, or just what we make of it: a weekend of fun, sharing what we love with a group of friends.”

It’s not all fun. The race lingers…

“The few days after the event, is the real punishment. That downhill just kills the quads.

Anthonie Hop-a-Long Mans wasn’t a runner a decade ago, but now his relationship with Harrismith Mountain Race is so committed, he has plaques on Platberg!

“Booi and I met at one of our local time trials, both around 10kg overweight and struggling to run a decent 4km. We then started training together, putting in some serious kilometers and very difficult training routes.

“As time progressed we got better and our runs got easier, and we started to look for new challenges

“Kevin had done Platberg in 2005 and in 2007 he recommended that we should go and do Harrismith Mountain Race as our new challenge.

“We started putting up the plaques with no-nails glue in 2010 – another “bright idea” on one of our afternoon training runs.

“We did not want to do any damage to the nature with the plaques but would like to leave our mark. Been here done that. An who’s knows maybe one day our children will run this great race and see our plaques on the mountain.

“Now neither Kevin or I can pin point it, but there is just something about this race. It is extremely tough but we go back every year to get “punished” all over again.

“We’ve made a promise that we will run this race till we drop dead one day.”