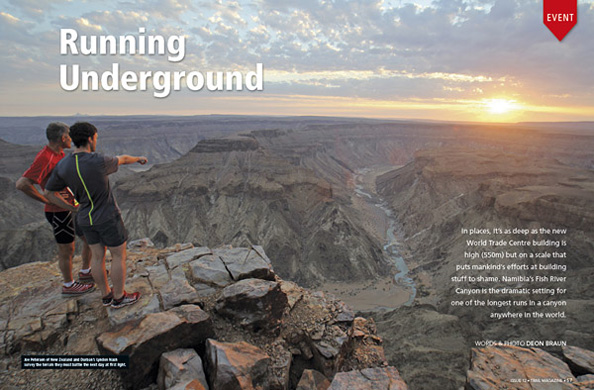 Fish is eclipsed in size only by Utah’s Grand Canyon, a 17 million year-old youngster, which is a mind-boggling 446km long.
The Grand Canyon has a handful of trail events, including a 24-hour, a rim-to-rim-to-rim, and a seven-day stage race. Not to be trumped though, our Namibian cousins have done Africa’s ancient canyon proud by staging a 100km race (and shorter 65km option) that is held almost entirely within its walls. Launched in 2011, the Fish River Canyon Ultra (FRCU) is known as a beast. And here I was, about to do it, along with more than 50 other people from around the world.

Whether you travel from South Africa or New Zealand, the drive from Nam’s capital, Windhoek, looks like it might be as much a challenge as the run you’re looking forward to. How crazy is this: you fly all the way to Windhoek and then spend most of the next day driving back to South Africa, to the north-south border. Luckily, we made the 650km journey across the sweeping beige winter grasslands of southern Namibia in the comfort of a shuttle bus arranged by the organisers. ‘We’ being a mix of equally crazy ultra runners: a Spaniard who’d run an ultra on all seven continents (he with the English vocabulary of Manuel of Fawlty Towers, we with the Spanish of Basil), two super-hero inspired Germans, a Swede (back for his fourth run), two Saffas and a Kiwi. Fellow Durbanite Lyndon and I got talking to Joe Petersen, a GP formerly from Joburg who has been living in New Zealand for over 20 years. He’s racked up a wealth of insights into trail runs around the world, especially Asia, Africa and Australasia.

PERCHED ON THE EDGE

Also arriving at the campsite that afternoon was Cape Town’s Cole Stanton, who had been felled by heat exhaustion last year. He said, “After my disastrous attempt in 2013, I knew that I had to return to confront the inner demons that had been eating away at my confidence like parasites! Seeing the view from the race village, I was again blown away by the beauty of the canyon. I understand why so many people return year after year to walk it. I’m sure there will be many trail runners who return every year too.”
An early supper and everyone leapt into their spacious two-man military style canvas tents for as much sleep as possible before a 4am breakfast wake-up.

Cole Stanton: “You will be forgiven if you think it’s going to be an easy day if you judge it by the first 10km of undulating gravel road before you hit Hiker’s Descent. This is where the enormity of the canyon and the task at hand hits you. You have no choice but to give yourself your first reality check of the day!
“When you get to the bottom of Hiker’s Descent, you are greeted by thick sand, in an area fittingly called The Beach. Once you have slogged your way through this section, you are greeted by boulders of mammoth proportions which will test you in ways you never imagined! I personally feel that it is at this stage of the race where you will either make or break your race.