Road and trail runner Eric Ngubane has been winning trail races in KZN since 2010, and made a splash on the SA trail scene when he won Ultra-trail Cape Town 100km in 2014. From 18km trails to the Comrades Marathon, Eric is at home on his feet.

“I started running in high school. I did soccer and cross country. I don’t play soccer any more, not since 2005. In September 2010 my friend said ‘come run the Umhlanga Trail Run.’ I never looked back. I have won that race 11 times.

I start training at 7am and then I have afternoon training at 3pm. I run 35km to 40km per day – depending on what I am training for – and do gym work in between.

I have more time for training now that (run retailer in Durban North) Sports Zone closed, after working there full-time for many years. 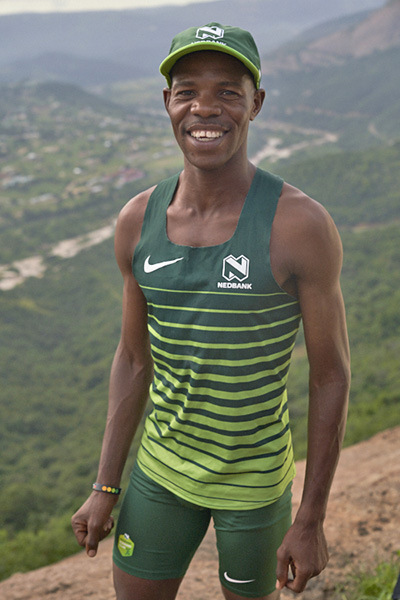 I am most proud of winning the 100km Ultra-trail Cape Town in 2014. That was an honour because I went through a lot during the race to become the winner.

I am also proud of winning the 2016 Lesotho Ultra Trail 50km. The race was over 3,300m above sea level, and when I look back on the event, I know my strength.

Winning all three WildSeries events (Three Cranes Challenge, Golden Gate Challenge, MontAux-Sources Challenge) is another achievement. I set records in each race in 2015 and 2016.

More recently, I am proud of winning the 2019 Karkloof 50 miler for the first time.

It has been a long journey in trail running and I’m looking forward to even better results this year. For now, I’m building up to Comrades Marathon. Straight after that, I will run many trails. If life goes well, you will see me at the start of Karkloof 50 mile again. But before that, I will run events like 1,000 Hills Challenge, and some short ones for speed. 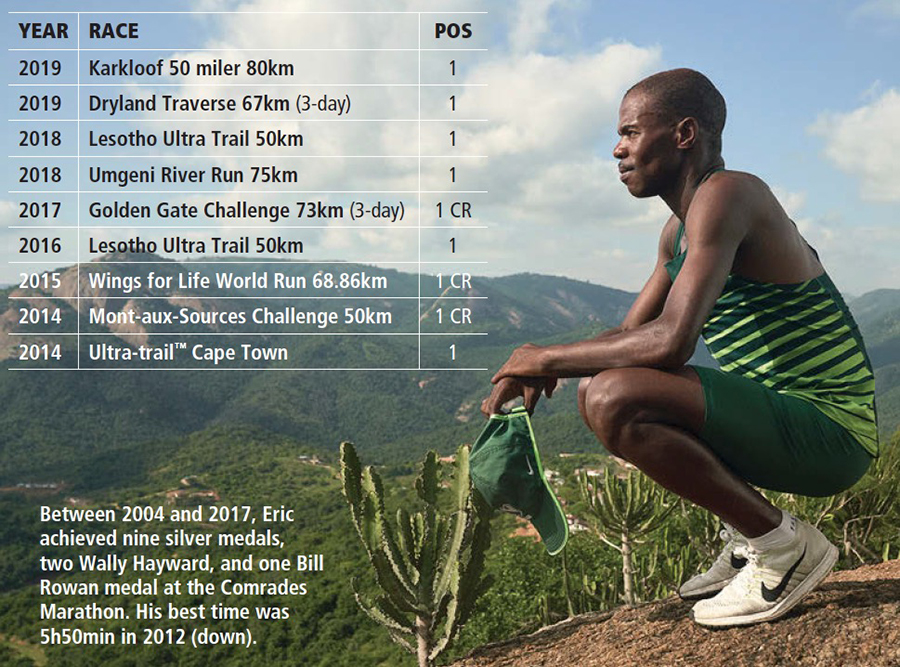 My home, my heart

I live with my wife and two boys. I don’t have a job, so I run to support my family. I also help support my mother and father back home.

My boys Sbongakonke (11) and Phendulani (9) live with me and my wife Hlengiwe near Hazelmere Dam, Verulam. My wife and I have been together for almost 13 years. She is busy studying sewing at a training centre in Verulam.

My boys both do sport, but I’m not going to ask them to commit to anything while they are so young. They do all kinds of sports at school, and join me for my gym exercises at home sometimes. Sbongakonke, the oldest, loves running. They love to play soccer and I make sure they always have a ball to kick around.

My parents live in Cato Ridge near the Dusi River. Growing up in the rural areas, they wanted me to watch the cows when I wasn’t at school, and they understood playing soccer. That’s what they know. To go away from home to compete in running is something they didn’t understand. They saw me get skinny in training but want me to be a bit chubby.

Now they are coming around to why I love running and support me. They don’t understand my training, but they always wish me good luck before a race, and encourage me.

I grew up with five younger brothers, but none of them do sport.

I haven’t run Comrades for the past two years. I wasn’t able to prepare mentally because I lost my job, and it put me under too much pressure. I have missed out on lots of other races because of my headspace and economic challenges.

It’s not any better now, but as I mature I accept the situation and carry on. You have to be tough to understand your life and make sure you create your own space for happiness. 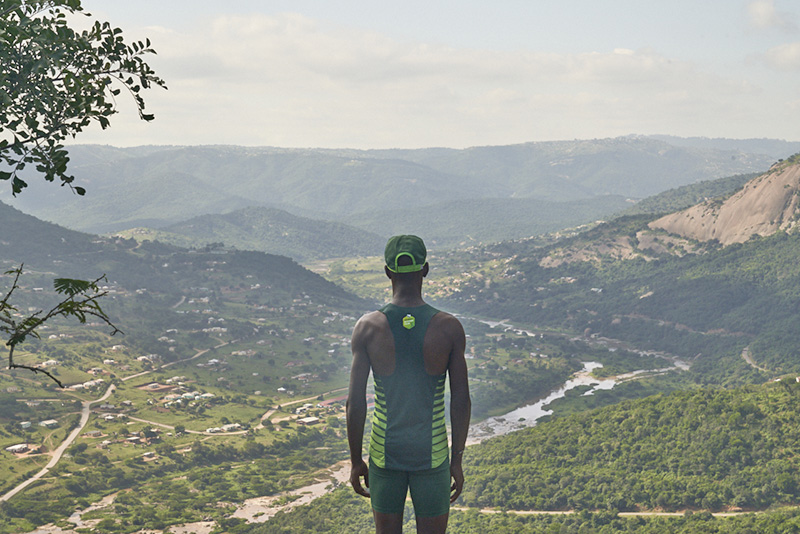 Together, we go far

Sometimes I go for a run in the valley, needing some water, and I go to a house where they don’t know me. Before I can even ask for help, the dogs come chasing out and I just keep running. Usually the people come out to ask what I want, and they will save me with water.

Sometimes I tell them where I came from and about the running training for whichever event, and that I’m hungry. They will dish me up some of whatever food they have. After I eat, I thank them and carry on.

That’s what makes me feel that I should do something for my community. In future I want to train another person who is even better than me at running. Many champions come from rural areas.

It’s hard to take on young runners, because they need resources for travel, races, and shoes. But I do have some good up-and-coming young people.

It is better to struggle before you succeed.

People in poor rural areas (like iSithumba in the Valley of 1,000 Hills) don’t have any idea about sport. They only focus on school.

Yes, school is the most important thing, but not all of us can be teachers or pilots. You can still make a living from sports. 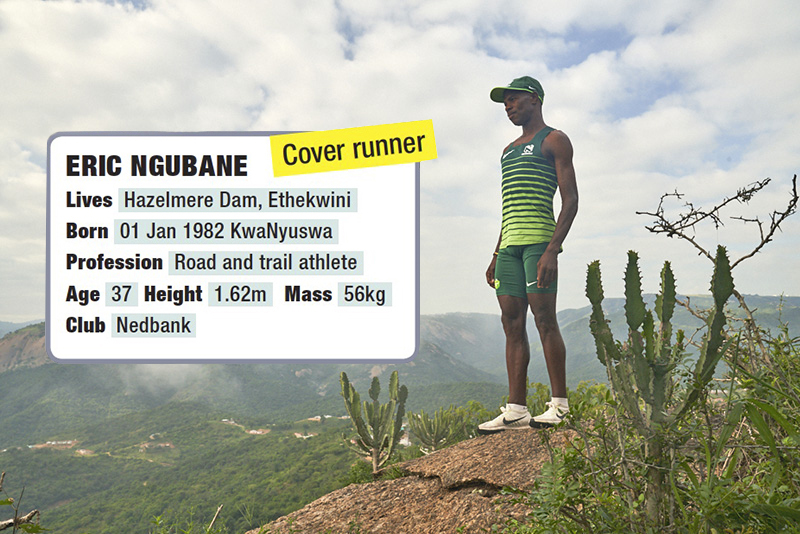 It’s a different atmosphere in trail and road running. On the road, all you are doing is watching the tar and going, going, going.

Offroad, there are surprises and challenges. There are birds and river crossings. The longer distances are a lot more interesting.

Trail has a better atmosphere than road. It’s a lot more friendly and family-oriented.

I train in the sugarcane fields, and get all the benefit of the trails out there. I do technical runs to strengthen my ankles.

My favourite trail race is Mont-aux-Sources Challenge. It’s amazing climbing the chain ladders there. I love it because it is so challenging.

That race is also where I had my scariest running moment. I was on the chain ladders, the wind was blowing, and there was a deep overhang. I almost lost my grip several times.

I was in the lead but I stopped, scared to go on. You never know when those chains will break.

[In September 2019, the chain ladder on the right lost a bolt connecting it to the rock face. No one was injured. In December 2019, an experienced hiker fell 25m off the chain ladders and had to be airlifted to hospital. He has recovered. The runners at the MontAux-Source Challenge are harnessed for safety, and the event has never had a casualty in this section. –Ed] 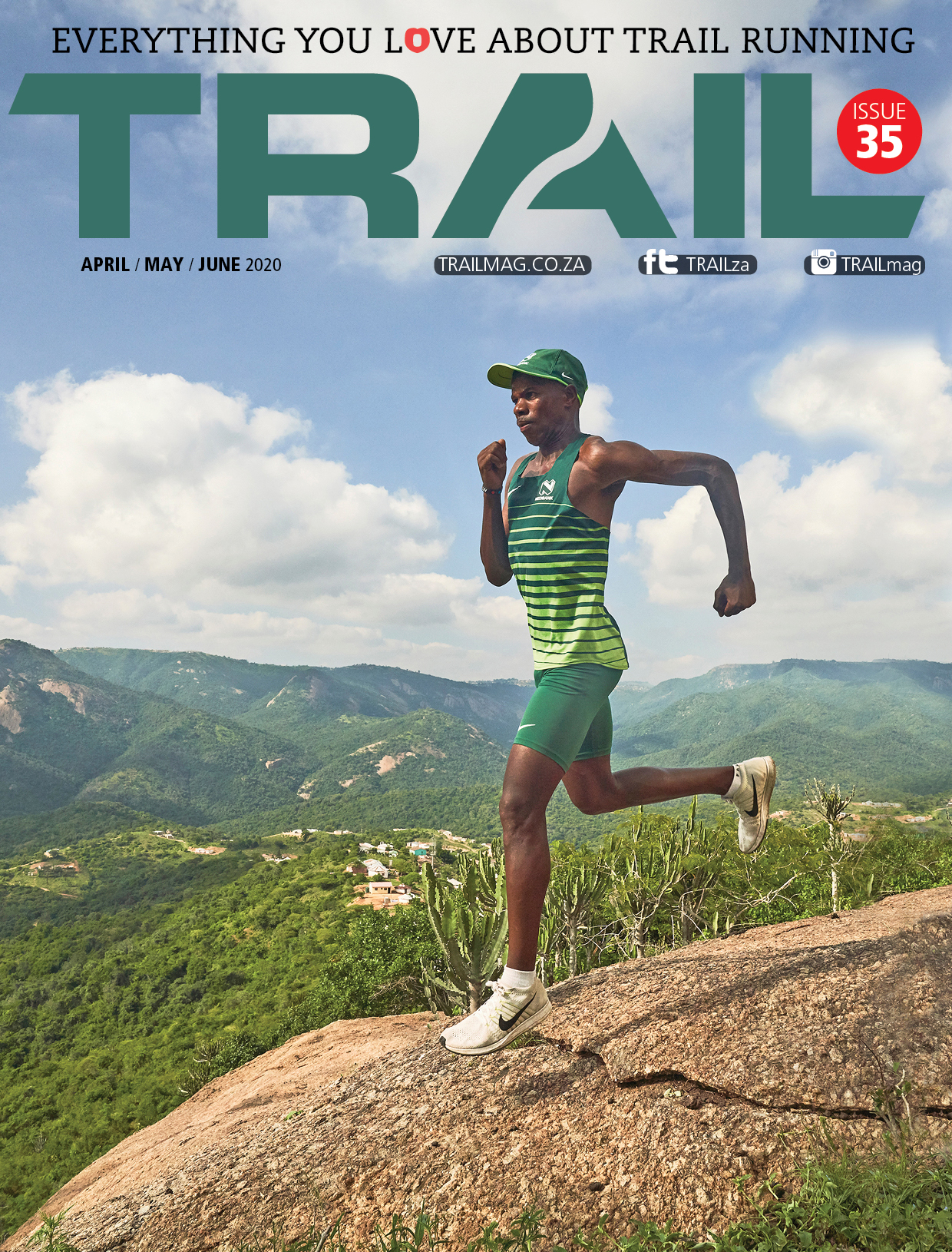 The difference between winning or not is in your heart. I train the same as everybody else.

I would love the opportunity to race internationally, if God is on my side. I have dreamed of doing more international races after representing South Africa at the 2015 IAU Trail World Championships in France.

I still feel the pain of not doing well there [he placed 30th in his category at Grand Trail des Templiers] so I have to clean the slate.

In the future, I want to organise my own trail running event, and buy my home, to show my people that sports can change the community and unite them.

Find the original interview in TRAIL issue 35, including a story about Eric from his friend and fellow cover athlete, Prodigal Khumalo.