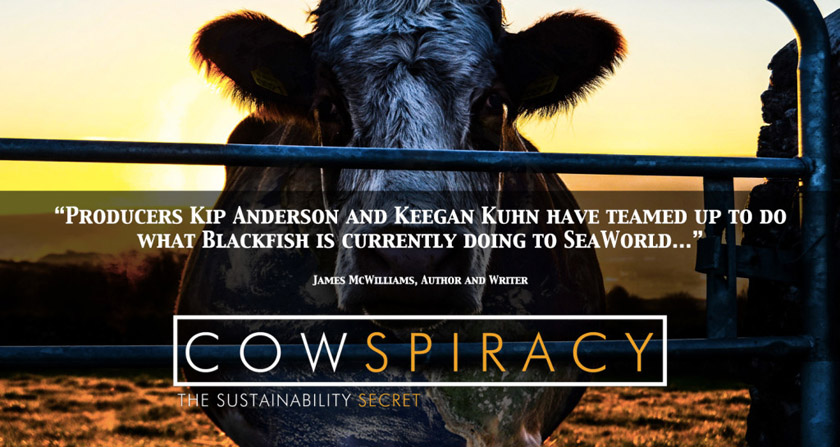 Are our eating habits thoughtless, and if so, are they harming the only home we have? If you think so, you’re definitely not alone.

This 90-minute film is one of the hardest-hitting documentaries, delivered with the gentlest, yet most insistent tone, you may ever see. Food production may prove to be the defining topic of this decade, venturing deeper into the devil’s lair to seek answers than Al Gore’s An Inconvenient Truth dared go with global warming. Cowspiracy’s original backers withdrew their funding because they deemed it too controversial.

Peeling away the façade

Cowspiracy is a patchwork of personal insights by filmmaker/producers Kip Andersen and Keegan Kuhn, stitched by a series of interviews that in turn link to the latest research findings from esteemed scientific bodies. Sleuth/experts like Michael Pollan (author of The Omnivore’s Dilemma and featured in the movie Food Inc (IMDB and Facebook)), Dr Richard Oppenlander and former beef baron Howard Lyman peel away the façade of the giant food companies that has consumers hoodwinked. 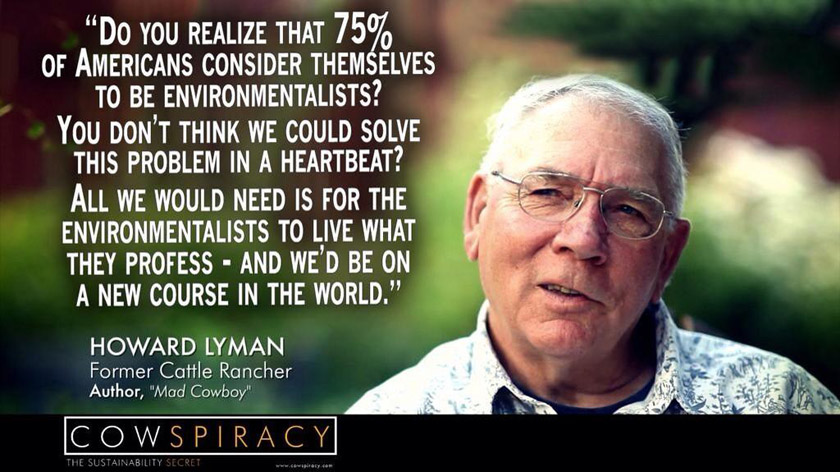 In the intro, narrator Kip outlines his early attempts to save water (with shorter showers), recycling paper and plastic, reducing greenhouse gases by cycling everywhere and ‘doing his bit’. After many showers, he realises it’s all a drop in the ocean if the vast wheels of agriculture are the leading (and unchanging) contributors to the imbalances the planet’s systems are currently beset by.

He is dismayed to learn that loss of rainforest habitats and desertification are caused primarily by animal agriculture. Around 91% of the Amazon’s area loss is due to converting land to grassland and soy bean fields for cattle feed. So he tries twice (unsuccessfully) to get an interview with Greenpeace. Surely they will champion the cause? Both requests are declined ever so politely. Digging deeper, the penny drops. No longer the hippie rebel, they’re a business, in bed with big government and the corporations who make them both dance to their tune for funding. If Greenpeace upsets the apple cart, it’s bye-bye funding. And actually taking on the big boys? That can be dangerous. Kip learns that there’ve been 1,100 murders of ecological activists in Amazonia in the past 20 years alone. 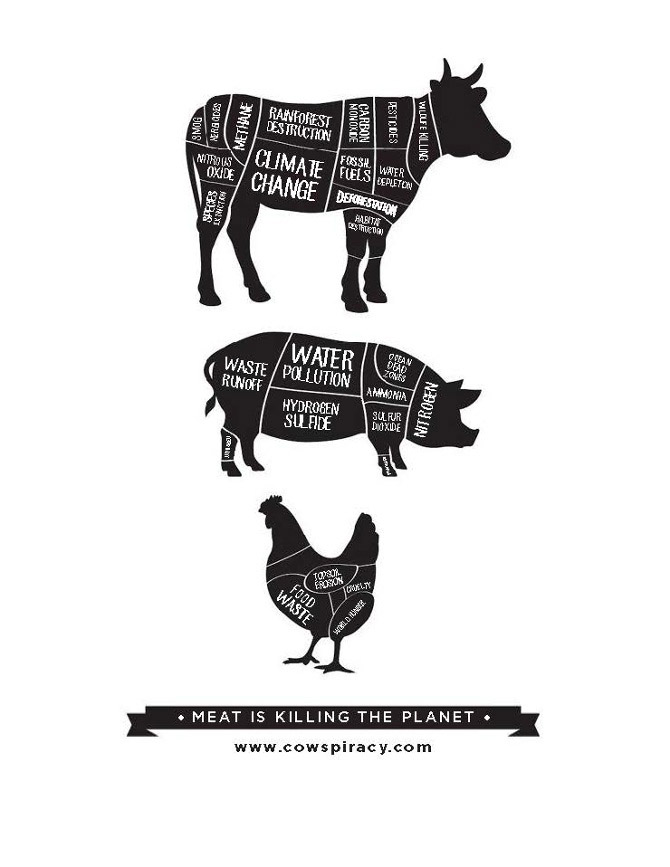 Why is this? And why, if our farming efforts produce enough plant food for up to 15 billion people, do one billion of our seven billion brothers and sisters starve daily? It’s simple, says Kip. More than 50% of the food produced is used to feed livestock. Nearly half of the contiguous USA is devoted to animal agriculture in some way. It’s a huge business, if anyone was wondering.

After witnessing a duck’s farmyard beheading, and then rescuing a chicken destined for the same fate, Kip decides that the only way he can become part of the solution is to stop eating animals and animal products. He’s going vegan.

“It’s great! Please watch it!” says musician (and vegan) Moby, who tells his story in an insightful Huffington Post article: “A few years ago, I was talking with Al Gore (yes, I’m name dropping).
I asked him a very simple and pointed question: ‘Animal agriculture contributes about 18 percent of the gases that cause climate change. Why didn’t you mention this in your book or movie?’

“His answer was disconcertingly honest. I’m paraphrasing, but he said: “For most people, the role of animal agriculture in climate change is too inconvenient a truth.’” 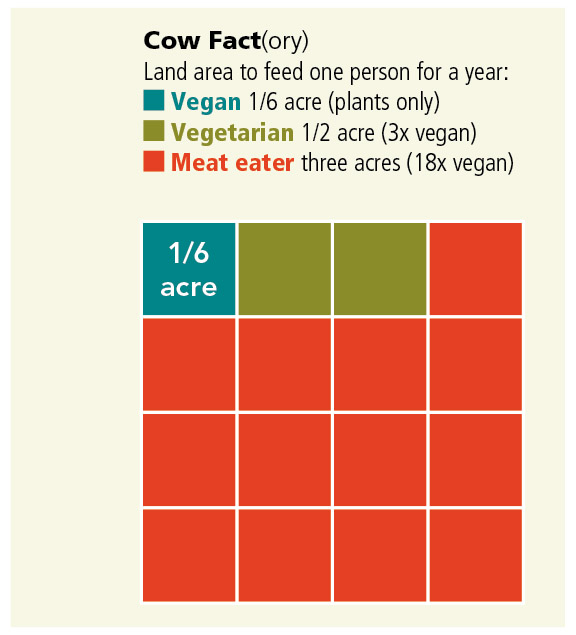 The realities of willful blindness, TED Talk by Margaret Heffernan
The most terrifying video you’ll ever see, An ordinary guy, a whiteboard, four climate change outcomes 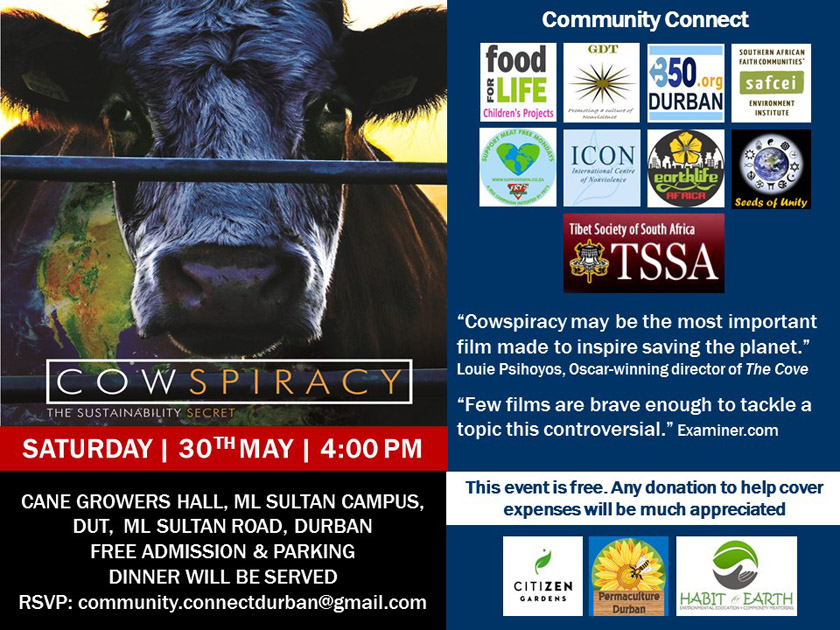