The Addo 100 Miler was revived by Port Elizabeth-based Free Spirit Adventures in 2016. They had taken ownership of the 44km and 76km events from race founders Estienne and Nadia Arndt the year before. The Arndts had organised Addo for 10 years (2005-2014), and the 100 Miler for five years (2005-2009).
The Arndts were well ahead of their time with the 100 Miler. In hindsight, South Africa probably just wasn’t ready for 100 mile trail runs in those days.

Fast forward to 2017, and runners like Johannesburg’s Martin Malherbe are a new generation of ultra runner. A cancer survivor, he shares his Addo 160km story here.

A tad on the hot side

The tension at race briefing was electric. At least I knew what we were in for, having been through this all before in 2016. But for the newbies it was big eyes and sweaty palms, with the talk including mentions of hippos, leopards, and snakes. We sang a jolly Happy Birthday to Tobie Reyneke, who was doing his 35th 100 miler. A lot of people would have done worse than following him for the next 34 hours. 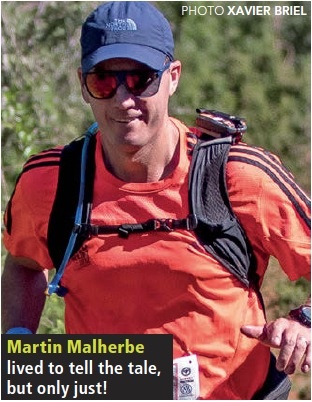 I took off with the leading eight runners at a pace of around 5:15 minutes per kay. Probably a bit quick for a 100 miler. (You think? – Ed). My heart rate was way too high, but it felt comfortable at that stage, and the running was on easy dirt roads for the first 10km to CP1 (Checkpoint One). I decided to stick with the pack.

However, Tom Adams and Andrea Biffi soon pulled away and left Andre-Hugo Van Zyl, Naomi Brand, Bradley Hyman, Darryn Patterson, Sébastien Lesage, and myself as the next six. I took a look back down the road as we passed CP1, and there was already a big gap to the next group.

Next, we were onto the singletrack up to Addo’s Camp Fig Tree. I have to go back to this place. It looked amazing as we ran through, with the residents having drinks on the deck, cheering us on. Then the climbing started up to CP2, and our small group started breaking up. Brad and Sébastien dropped back, and I was hanging on to Andre and Naomi. If I was in touching distance at the top of the climbs and going into the night, we would stick together. At least that was my plan. 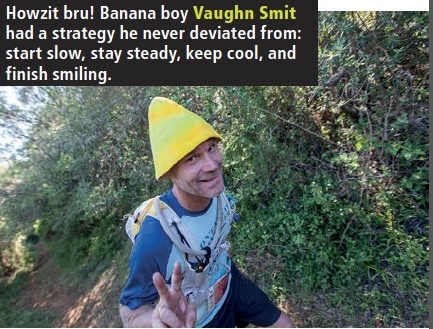 Checkpoints 2, 3, and 4 all came and went fairly quickly without us stopping too long. The running was very easy on jeeptrack on the ridge line. Now we were down to three in the chasing group. We had dropped Darryn. We went through the first 40km in 4h30. That’s about 45 minutes faster than I did in 2016. The sun was setting and thankfully, it was cooling down.

We headed down the massive hill to CP5, famously known as Ellie’s Tavern. Her millionaire’s shortbread was like heaven on earth, and I also scoffed a muffin. All great pre-dinner snacks. Out came the headlamps and off we headed into the forests. The next section has numerous crossings of a shallow river, which gets your feet wet about 10 times. The rest of that section was fairly easy running, and getting used to running with lights.

Just before CP6 I saw Andre and Naomi jump in the road in front of me, and then look back and take out their phones. I approached slowly to see a night adder sliding across the road. It looked like it had just eaten something, so it wasn’t too interested in us.

CP6 served up delicious butternut soup. Incredible stuff. I could have sat there and had three or four helpings, but Naomi was pulling us along.

The 60km mark (at CP7) was where Andre finally gave into his exhaustion. He had been constantly yawning and said he needed a quick 10-minute power nap. The rangers gave him a mattress and he was almost asleep when Naomi and I left on our own. We kept running really well on all the flats and downhills, but were power walking the uphills now. We were still ticking off the kilometres nicely and running about six minutes per kay through this section. Very easy running with a full moon overhead. Andre would have to push hard to catch us. (He never did. He did take four more power naps along the way though.)

From CP8 we climbed steeply. It was pleasant to do some walking after all the running in the last section. Up and down we went. We couldn’t see any lights behind us when we crested a hill. Good to know no-one was close behind! 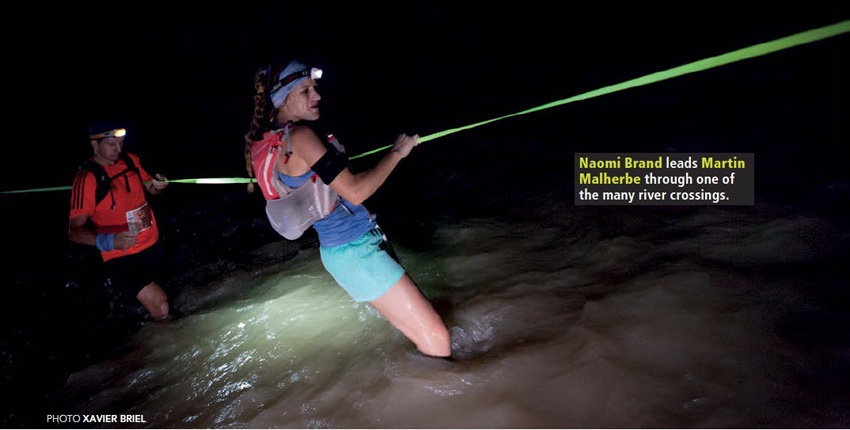 This section was the first of three crossings of the Sundays River. There hadn’t been much rain, so all crossings were only thigh deep, although the river was running quite strongly. We were told to look out for hippos, so that was our main concern. We didn’t see or hear any. Again we were into fairly easy running along the river and made good progress. We went through halfway in 9h50 (doing 5h20 for that 40km section). Suddenly a sub-24 hour was on my mind. Could we do back-to-back seven hour 40km segments to finish this thing? I knew the Valley of Tears was going to be the spanner in the works.

When we got to CP10, we found it had amazing hot soup. I dunked some bread into mine. Nice for a 1am snack and a thousand times better than a GU. I wish they had that at every aid station.

We arrived at the last Sundays River crossing just before CP11 and our drop bags at 96km. The time was 2:15am. A far cry from last year’s 5:15am arrival. A quick change of socks, shirt, and a replenishment of food and drinks in the backpack, another change of headlamp batteries, and we were off! I had all my sunscreen here so decided to apply it liberally, knowing that the heat was coming. The rangers thought I was odd, but I didn’t get burned later!

The CP11 to CP12 (96km to 104km) section is infamous for FSH, the F@#$ Sian Hill, named in 2016 after race director Sian O’Keeffe. It’s a brutal straight-up climb and a downhill into CP12 that you have to walk both ways. It’s too steep to run down. We went through the 100km mark in just under 13 hours. That’s a lot quicker than my time at Ultra-trail Cape Town, so shows how easy the running was in the first half. Unfortunately, it only gets more brutal in the final 60km, as a race profile map will reveal!

The guys at CP12 recognised me from 2016 and took some photos of us. I think they hadn’t seen anyone in a while, so it was good to have someone in their aid station. They were excited that a woman (Naomi) was placed in joint third overall, and were offering us all sorts of food and drinks.

On we went. The running to CP13 was again up and down. Naomi was really pulling us along here.

CP13 was the medical check which we passed with flying colours and off into the Valley of Tears we went. I was dreading this part. It took over four and a half hours to do this 17km section to CP14 last year. The leaders did it in 3:30 last year. 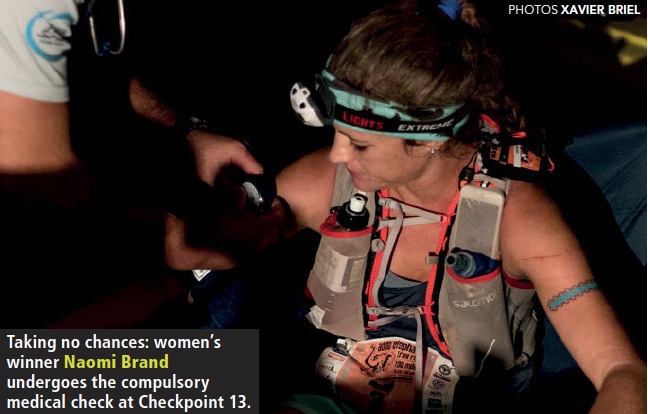 But now we were here at 4:50am, the sun wasn’t up and we were going to crush this thing. We got lost a few times in the beginning through the forest sections, but Naomi was an expert at checking the GPS and getting us back on route. Then the climbs began. Up and down the side of the valley and through numerous little streams, all fairly dry. We passed the three quarter mark (120km) in 17 hours exactly, making it 7h05 for that section. Now for another seven hour final 40km. Sounds easy, but far from it!

Finally we made it back to CP14 (Ellie’s Tavern, for the second time) and out of the valley at 128km, where we met up with the middle of the 44km race. It was great to see other runners after 3h30 in the valley and their excitement really rubbed off on us. I sat at this station for over 20 minutes last year. This year there was no sitting. We grabbed more millionaire’s shortbread and marched on. 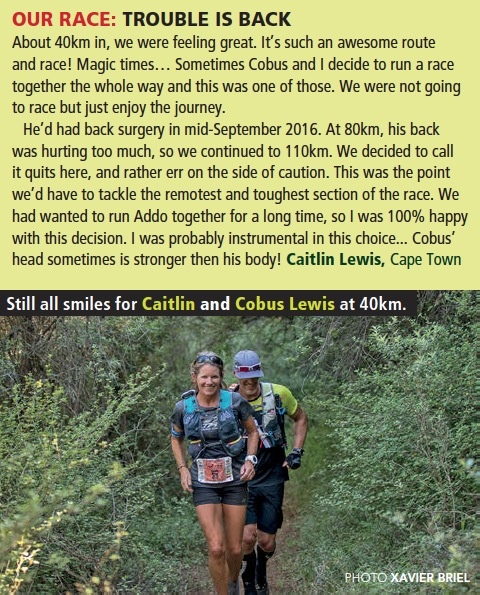 Passing many 44km runners up the big hill gave us a huge physiological boost. They were really encouraging us and staring in awe. We felt like celebs as the camera crew was also following us a lot at this point.

We were heading home with less than 30km to go. Here the checkpoints were 10km apart, so the first 5km out of an aid station were alright as we had just had a cold water shower and drunk a lot of stuff.

The next five were spent hanging on by a thread, with the temperature pushing into the high 30s.

Ryan Sandes came flying past at CP16. He was leading the 76km race and won by an hour. He looked like he was taking strain from the heat but sprinted off out of the aid station.

It was awesome to see the front of a race up close and how he was attacking the course.

The next 76km runners only passed us after CP17.

I was a total mess going into CP17. Mentally, I was done. It was like running in a furnace. I couldn’t breathe and my skin felt like it was baking. No amount of drinking soothed the mouth or throat. A car parked in the sun was showing 49°C on the temperature gauge. I knew we could finish even if we walked it out, but I wanted to keep third place, and the calculations of the sub-24 hour were going around in my mind.

The last section is a brutal climb. Luckily Naomi finally made the call that we didn’t have to run anymore. I was about to do the same, as my calf had just cramped and was a spasm of pain. 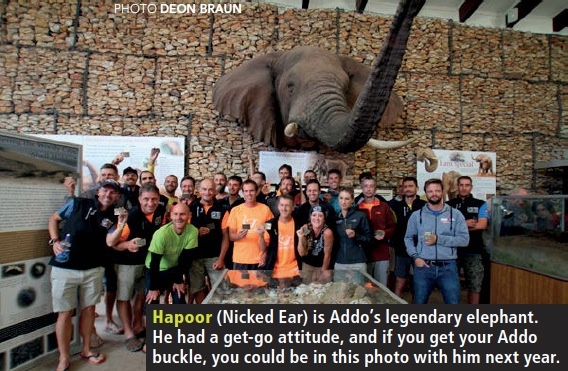 On we climbed, only broken by a brief swim in a river. Just 1km later I was bone-dry again. We finally got to the top of the climb and could see the finish about 800m away. We had long given up on the sub-24 hour, as the climb was just too slow. But, we now realised it was going to be seriously tight. A final sprint (probably six minute per kay pace) and over the line we flew.

Naomi took third overall, first woman, and first South African. She fully deserved that after all the work she had done in our partnership. She took five hours 25 minutes off the previous Addo 100 mile course record set by Linda Doke!

Tom had won in 20h33min and Andrea second in 22h34min. Interesting that Tom’s winning time was quite similar to his 34th place at Western States last year.

What a race! Nearly everything went to plan. 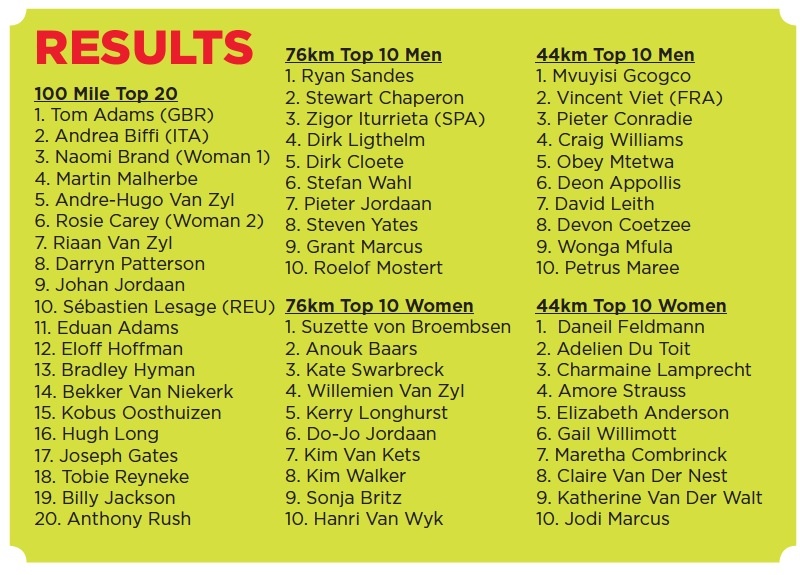 This article was originally published in TRAIL magazine issue 24, pages 82-87. 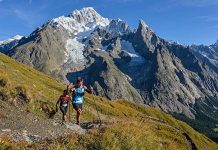 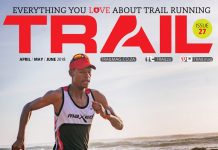 Happy Friday Twitter! We hope your weekend will be filled with people who speak #trailrunning. 🙂 #HappyTrails! pic.twitter.com/zoaN…

#TBT to last year's #MacMacUltra as Jansen & Cronje (their first names!) run through verdant #Mpumalanga forest in the 80km. Did you run the 46k, 80k, or 100 miler? What about this year? 😉 (22-24 May) macmacultra.com #trailrunning 📸 @SvenMusica pic.twitter.com/HF5O…

ABOUT US
TRAIL magazine is crafted by trail runners all over South Africa who share their love for trail running and nature through every letter, photo, article, tweet, and Facebook comment they contribute. The team at TRAIL loves reflecting and sharing the energy that we find on trails around the world.
Contact us: website@trailmag.co.za
FOLLOW US
© copyright 2011-2020 TRAIL magazine South Africa.