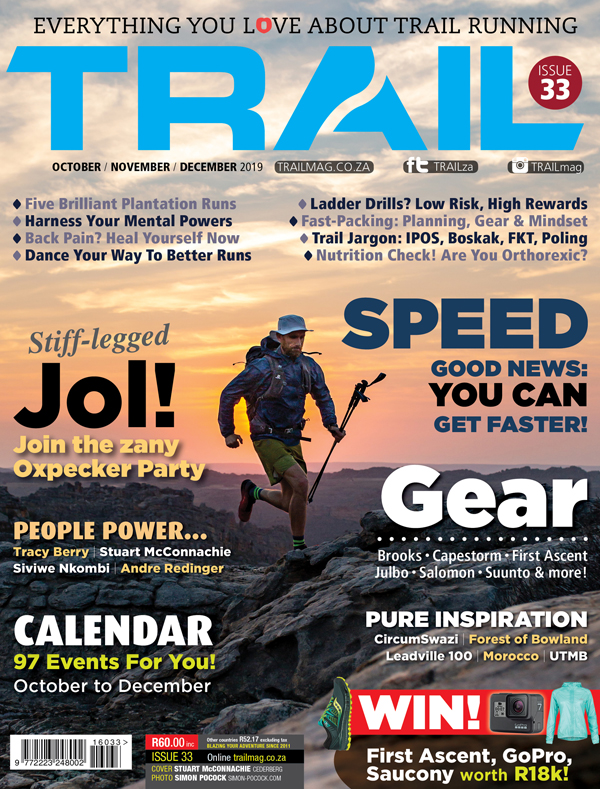 We are TRAIL magazine!

Blaze your own adventure with TRAIL magazine, South Africa’s trail running go-to for inspiration and information.

Founded in 2011 and based in Durban, TRAIL is published four times a year, and 100% of the content is hand-crafted in beautiful South Africa. Get 100 pages of trail running nirvana in TRAIL magazine!

We love sharing the energy we find on trails all around the world.

This paper and digital magazine we forge every issue is 100% from the heart. It’s created with great people from South Africa, Chile, Germany, India, France, Mauritius, Namibia, the UK and US – and anywhere else good humans like to feel alive in the vastness of our tiny planet.

Everyone loves to tell and hear uplifting stories of challenge, temporary defeat, rising against the odds… and eventually, winning.

TRAIL readers are high income, active, and adventurous people who love the outdoors. One of their great passions is running on trails and experiencing the wide open spaces of nature. Many have also enjoyed mountain biking, hiking and road running. They place high emphasis on travel, technology and photography. They are gear-centric but not gear-obsessed. In their view, gear should be functional and not merely something pretty to look at.

TRAIL advertisers realise that to get you also give – and that by being part of a magazine, you tap into a deep consciousness that is very hard to do in a standalone D.I.Y. attempt.

We hope you enjoy TRAIL as much as we love to bring it all together.

ABOUT US
TRAIL magazine is crafted by trail runners all over South Africa who share their love for trail running and nature through every letter, photo, article, tweet, and Facebook comment they contribute. The team at TRAIL loves reflecting and sharing the energy that we find on trails around the world.
Contact us: website@trailmag.co.za
FOLLOW US
© copyright 2011-2020 TRAIL magazine South Africa.