This is the second year we’ve hosted the Trail Film Awards because we feel strongly that South African trail runners have remarkable stories to share. Start filming and editing your film in the Documentary, Event, and Shorts category for 2020’s Film Awards. We’ll open entries later this year. If you feel your film needs a different category, tell us. 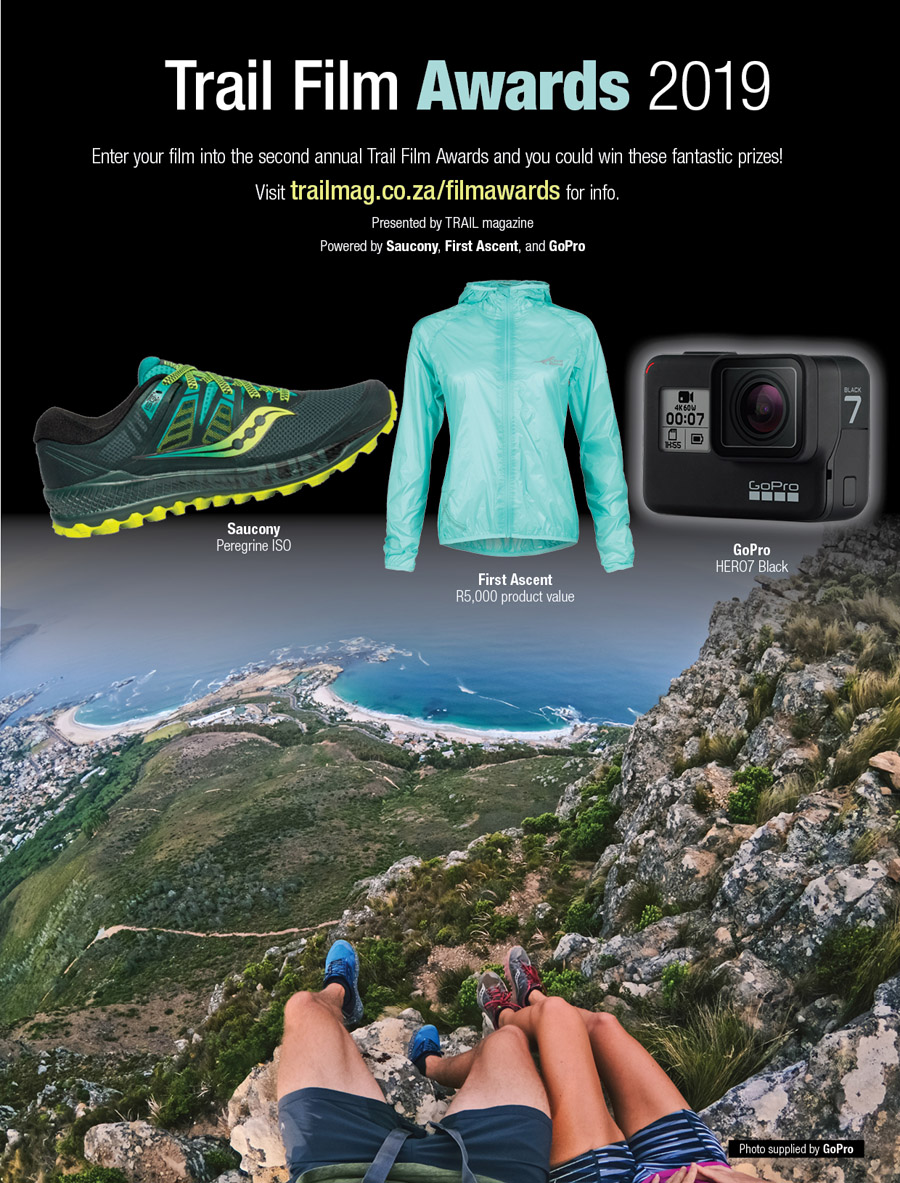 Mates head to the Cederberg, plan a route, and share the views with us to a mellow soundtrack.

High production value documentary of Teboho Noosi, an athlete from Lesotho who dreams of breaking records.

A self crafted challenge takes a trio of friends on a long difficult journey. Action footage interspersed with interviews.

Filmmaker documents her son’s most painful and victorious moments at checkpoints throughout Katkloof 100 miler.

The elites duke it out for victory at the Grail of Trail with a soundtrack and footage that feels like and action movie.

Happy memories of Karkloof 100 Miler, and the inevitable pain that comes with that distance.

A wordless summary of the beautiful experience, complete with statement moustaches and apt music choices.

Shorts winner Finding Peace on the Trail by Dawn Nunes

A highly relatable collage of moments Ruth has experienced in her trail running journey in the past year.

Action footage from a solo trail run showing off the beauty of TM on a sunny day.

A wanderlust collage of clips and photos from the CT Rockjumpers crew at Cappadocia Ultra Trail with a piano soundtrack.

Shining a light on trail running by Geoffrey Hunt

A humorous solution to the bane of South Africans: load shedding!

Running for Beer! by UltraRunningSA

Short, fun, upbeat film of a social run and the resultant celebration.

This year, we’re broadening the scope.

The 2019 Trail Film Awards will showcase trail running films produced by anyone, anywhere.

However, only non-professional South African citizens resident in SA are eligible for the sponsor prizes.

For some background, scroll down to explore the 2018 Awards, with Saucony and Hi-Tec as its sponsors.

Chasing the Prodigal (6 min) by Lost in South Africa

We are fans of the Trails in Motion Film Festival (which mostly screens international films) and the Cape Union Mart Adventure Film Challenge during the Banff Film Festival. The SA Trail Film Awards are in no way a replication of their good work, as the focus is quite different.

There are currently no other official Awards for South African trail running films that we know of, and our goal is to develop a vehicle to do that.

We think this kind of exposure for South African filmmakers should be encouraged and developed because this will boost creativity and pride in South Africa’s vibrant trail running scene.

We value feedback from fellow creatives who want to make a meaningful difference to the future of South Africa.